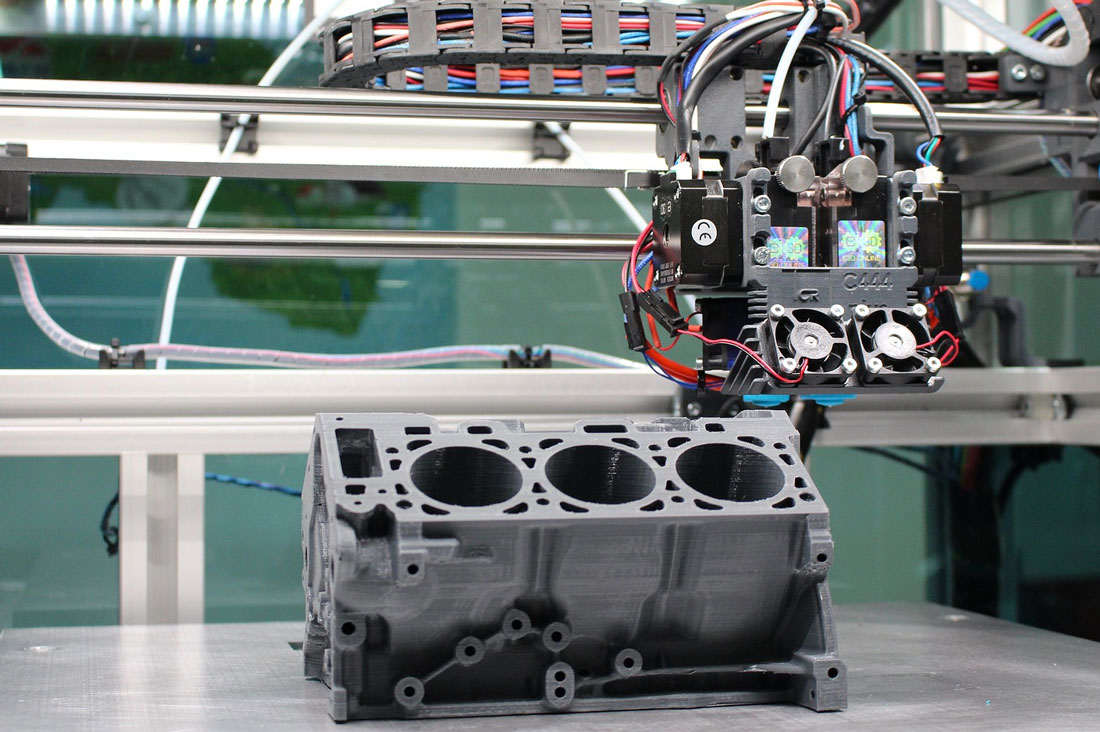 EcoAllene® has elevated characteristics of personalization and moulding, with high repeatability of characteristics in all technologies of transformation used. This makes EcoAllene® comparable, in terms of processing and moulding, to other common plastics, allowing companies to transform it the same way as it would a raw product with constant parameters, avoiding the troublesome continual adjustments typical of “recycled materials” from heterogeneous plastics.

Injection moulding is the most common technology on the market. The material is melted in a system featuring a material hopper and an injection ram, and then injected into a mould where the part is cooled and can then be handled or used.

This technology uses a machine, the press, which carries out two fundamental functions:

The mould unit also includes an ejector, which, at the end of the cycle, when the part is at the right temperature, uses its movement to extract it from the mould.

Over the years, mould injection technology has undergone continual changes, going from electrical/mechanical system controls to electronic ones, and finally to truly innovative variations to the basic cycle in order to obtain higher performance from both an aesthetic and a mechanical point of view, such as:

This is commonly used in the automotive sector (fake wood or kevlar panelling, emblems, etc.) and in the emotional purchase market (smartphone covers, aesthetic coverings, etc.)

There are also hybrid systems, in which the plastic material takes on a structural function, essentially to reinforce a metallic profile. This technology is often used by car makers for structural parts such as the front end or chassis structures.

This is suitable for thick parts that need aesthetic and/or structural definition.

The material is broken down into a powder and inserted into a mould, which is then heated in order to allow a change of state (solid to liquid) of the material, while being rotated on three axes in order to distribute the product to the outer walls of the mould through centrifugal force. This technology is suitable for components of large dimensions and/or low production, in particular for hollow parts. Although this technique requires a long cycle time, it has low costs due to the low pressure involved, making it useful for the production of cisterns, playground games or structures for road signage. The world of design has recently depended a lot on this technology, for the reasons mentioned above, in the production of vases, lampshades, furniture and decor in general.

This technology has two phases – first an injection phase to form a parison, or preform, and subsequently the positioning of the part in a mould, in which it is heated and air is blown into it until the material is stretched and made to adhere to the walls of the mould. This technology is used in bottle production, as a way of reproducing the work normally carried out by glass blowers. The parisons, or preforms, are produced using mould injection technology (see above description). The blowing phase occurs after the preform is inserted into the mould and heated. A nozzle is inserted into the preform part and air is blown into it, making it take the shape of the mould. Working on the preform, different thicknesses can be obtained based on the resistance needed for the finished product. Higher or lower pressure and temperatures are used depending on the material being used. As mentioned, the most common application of this technology is for PET bottles. However, another use, also for water distribution, is the large containers used for water coolers, and also for containers for cleaning products and oil.

The idea to pass a material through a shaped hole in order for it to take on a form goes back to the late 1800s, when it was first used for metals. The introduction and growth of plastic materials gave this technology an evolutionary boost which has made it what it is today. The material is melted in a feed screw system and then passed continuously through a die which gives it its shape. The die, placed at the opening of the heated cylinder in which the material is melted, is a plate with shaped holes in it, designed to create a section of the product (just think of the shaped plates used in making pasta, the basic idea is the same). Once the material comes out of the die, it is calibrated in order to guarantee the size and shape. It is then cooled so that it can be cut to the desired length. Depending on market demand, the extruded “bars” are cut to measure for end use.

Some of the typical products made using this technology are tubes, complex profiles like structures for windows or electric cable ducts, gaskets or hollow core panels.

Just as with mould injection, this system evolved to be used in conjunction with similar technologies in order to increase performance, such as:

If want to receive TDS and SDS, please write to infotech@ecoplasteam.com

EcoAllene® is a new and innovative polymer derived from recycled polylaminates, i.e. material made up a plastic layer and a metal layer.

EcoAllene® is created through a patent-protected production process. It is a new eco-friendly plastic material with a vast variety of uses.

The production process involves recycling packaging which would otherwise end up in a landfill or incinerator, such as sweet wrappers, packaging for beverages, certain capsules for hot drinks, etc.

EcoAllene® is one of a group of synthetic plastic polymers, and is a polyethylene containing aluminium.  It is a very versatile material, with similar characteristics to most common types of plastic.

Aside from its intrinsic ecological properties as a 100% recyclable material, EcoAllene® has another fundamental aspect:

ECONOMICALLY COMPETITIVE: EcoAllene® is different from other plastic materials in that it is highly competitive on the market due to the fact that it does not depend on the fluctuating price of oil.

This characteristic makes it practically immune to oscillations of external price factors, unlike other plastic materials.